Whisky is an integral part of my life

Interviewer: You are Global Scotch whisky Ambassador for the Singleton and now scotch is a very important part of your life. Do you remember trying whisky for the first time and how was it?

The first time I really remember cracking it, enjoying was when I started to work at bars. It was sweet and honey and citrus, not too challenging and that was the moment actually I really liked it.

It’s always around you. Scotch has amazing power to bring you back to somewhere just as soon as you smell it and it does for us being from Scotland. It brings you back quite a while.

I: You became a global brand ambassador in relatively young age. What brought you there? Was it your goal or was it just some lucky circumstances?
ET: Well, I worked behind the bar from the age of 17 and I worked for some smaller companies and I knew I always wanted to travel the world to talk about Scottish whisky. It’s a good job to do when you are relatively young. It’s quite a lot of travel. I did want to travel and it was definitely my goal. Doing it for the world biggest scotch company wasn’t a plan, it was quite lucky circumstance. It’s a massive honor to travel around the world and share national drink with people in different countries.

I: Maybe it’s kind of silly question but still — what does a global ambassador do? What are your usual every day duties?
ET: It’s a really hard question to answer. Well, it’s constantly like booking holidays. You’re talking with markets, you’re planning activities, you are making sure that when you’re at the market you do as much as you possibly can get in front of many people. And making sure it’s a right type activity for what you want to do.
It’s also talking to bartenders and hosting lunches and dinners and all different types. We do a lot of internal work like talking to people from Diageo about how they sell scotch as well as smth you don’t really talk about very often …something glamorous like coming to Barometer and talking on the main stage stuff. There is no really a normal day at this job, it can be very different. It’s a particularly strange experience, talking in very strange environment, it’s great. It just shows where scotch ends up. Scotch from a country with 5.5 million people is currently available in over 180 countries. It’s amazing. We’re very a small country with this massive global export and it’s amazing how every single country acts with it completely differently. So you truly find yourself in a very funny experience.

I: You have a quite impressive background as a bartender and mixologist. Can you tell your personal top three cocktails?
ET: Well, just three? Actually, I’ve pretty much to say (laughing)


I: Ok, top one?
ET: Highball. Both of my top two are there exactly for the same reason as High Ball and Old Fashioned. They both have this incredible ability to bridge the gap between experienced whisky drinker and complete amateur. But they show off whisky in a very similar way.

Highball makes scotch approachable. It makes scotch available and it makes scotch accessible to people because you drop it not intensive in alcohol, you’re revealing more flavors underneath. It’s cool because the pure is loved as well. Because it’s still seen as being an expression of a cocktail that shows off a single malt in a pure form. So you can serve a Highball to anyone, non–scotch drinkers or hard-scotch drinkers will enjoy it.

The Old Fashioned does exactly the same. It takes the ages off the whisky, it makes it accessible, also for that home-drinker is so simple to make it. There are three ingredients. Anyone can do it.
The biggest compliment you can get as a bartender is when one of your guests comes back and says “I made that drink you’ve made me at home for my friends”. It’s the biggest compliment. It’s so easy explained over bar that why won’t people make it at home? And that’s the best thing for me.
You can take your Scottish whisky; you can take some bitters and sweetening agents and you can make an unlimited number of different expressions of the cocktail. As bartenders we want to have more people drinking cocktails.
So Highball, Old Fashioned and Pina Colada. Cocktails are supposed to be fun. Pina Colada is fun (laughing). I make up Pina Colada with Talisker, call it Buckthorn Coladas.
Cocktails are supposed to be fun.

It was Talisker, gingerbread and hazelnut, and cracked black peppers on top and it was not fashioned basically. It was served with smoked fish from Scotland called Arbroath Smokie — it’s very common fish in central Scotland. Yeah, that was the first cocktail I made at the competitions. I remember it was very sweet.


I: Did you win with this cocktail?

ET: No.  I think I came the 3rd in the Northern Final. But it’s the 1st drink I remember to make at a cocktail competition.

I: What’s the funniest or the strangest ingredient you’ve used in your cocktail?

There were drinks with oyster shells which I think is amazing but very odd.

Actually, I want people to be able to recreate what I do so…

Well, ok, there is a bar in London called Crucible which is owned by my best friend Stewart and we spent an afternoon making a drink that was wild.

We took Singleton 18 and put fresh pineapple, redistilled which essentially took all of the itching characteristics of the whisky so all vanilla, all your rich dark flavors mixed with pineapple and in the end, you have the redistilled pineapple infused 18-year old whisky. We took the slushy stuff left over and made ice-cream so we had 18-old ice-cream.

Read more: ” Over nearly 30 years I believe I’ve made and sampled more cocktails than anybody else in history – and I’m still going ” – Simon Difford.

I: Let’s have a question about Barometer. Sure, you’ve been there. First of all, what do you think about it? And how often do you attend such events? Do you think they are useful and for what: for inspiration, for work, for grabbing some tips from others? 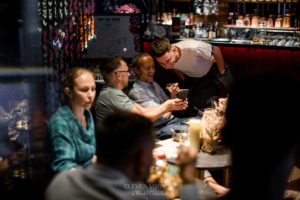 ET: The 1st thing that hit me is the size of it. It’s enormously huge. It was amazing, like, people just go, turn up.

I gave a talk at the 2nd biggest room and it was just like 400 people in the room, 200 people in seats and people standing up in the back. And I like “This is insane, it’s enormous, talking to so many people.” There are only 2 of them at this scale. It’s great. It’s good for us to get to know what else is on the market because we usually see only our stuff

My favorite part about Barometer is the actual bars, you actually can see what the top bars in the world are doing with their products. I think it’s very clever and it’s what we should learn from.

I: Do you often go to such events?

ET: Yeah, in Europe, sometimes in Asia, some whiskey-focused as well: for bartenders, by bartenders. Probably, 5 or 6 times a year.

I: What about work/life balance? Do you care about it? How do you keep it? If it’s possible to keep it with your work.

ET: Yeah, I’m very lucky to have support from my fiancée. We’ve just bought a new house so it makes your time home way more special. I’ve done 2 years when I travelled 50-60 % of the year which is heavy. Then I had a break of 6 month when we had our 1st child, it was good to recharge as well.

And then the plan is to come back but I don’t think I’ll travel as much again as this balance of work and life has shifted towards life and it’s great.

If you travel 360 days year, at the end you have nothing. And companies are realizing it as well that you are not a machine.

I remember 5 years ago people did this job for 2 years and then they went off, they had another one. We’re seeing more people now doing this longer which is good.

ET: For drinks, when you talk about whisky inspiration, you’ve got a prepackaged product that has a buck of flavors and of stories of people and places and beautiful countries. When you make a drink, you want to take someone to that place. It’s about creating experience.

And there are so many good public speakers, people I enjoy working with and who formed my talking style.

I: I mean, for example, you definitely need some source of inspiration to create something new crazy and interesting.

ET: Yeah, when you get to travel around the world’s best bars, it’s very easy to be inspired by what these guys do, to make a tiny version of something, maybe a little slightly less advanced one of what people can get on board with and enjoy.

And it goes back to the old-fashioned idea that we want people — and I hope we do inspire them — to do something similar. All these wonderful bars and all these amazing people are experiencing a list of different cultures.

I: As you travel a lot, what tips do you bring from everywhere, what exactly did you bring to your own work from there? 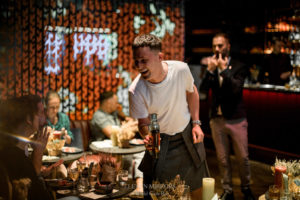 And it’s so nice when you work with these products, every bartender will give you cocktail ingredients, equipment, its line in cocktail presentation — all of these things inspire us, inspire me. It’s really easy to turn up with something cool when people are constantly feeding you information.

ET: I don’t know, something to do with going through time.

I: Back or forward?

ET: Forward. So many good ones to pick up from, I don’t want to get wrong. I can either be really fast so I can stop missing flights. I’d like to be speedy. And maybe really fast behind the bar. It would be very good! I’d be a superman, with a suit.